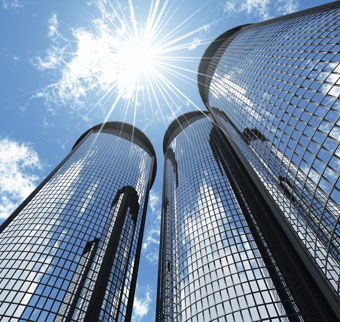 The real estate sector continues to face a number of challenges, and this is the reason that analysts have rated as ‘above estimates’ the 1% net profit growth by Oberoi Realty, a Mumbai-focused builder. Another reason for this enthusiasm is the stable operating numbers. The company’s realisation increased by 8% on a quarter-overquarter basis, despite a 5% fall in volume during the same period. The occupancy rate at Oberoi Mall was stable at 95%, while the occupancy for Commerz also rose marginally to 83%.

Oberoi Realty also has a steady project pipeline in place. It has already received approvals for its Esquire project at Goregaon under the revised development control rules (DCR), and expects to start construction within a few weeks. The Oasis project in Worli has started and the same is expected to reach the 25% construction threshold in 2013-14 itself. However, the Mumbai commercial real estate market is still struggling with oversupply and, therefore, the demand for Commerz II is not as robust as it was for Commerz I. To mitigate the problem, Oberoi Realty is planning to convert some of its commercial projects to residential ones, and this should provide the much-needed visibility for the coming quarters.

The company is also considering foraying into other important markets. To begin with, it is planning to make an investment of 150 crore in the National Capital Region, and additional investments will be on the basis of its success. This implies that success on this front should act as a major trigger for the stock. The firm is still waiting for the environmental clearance for its Mulund project, and any news on that front can be another trigger. As of now, the strong execution history and high-end construction quality differentiate Oberoi Realty from other players. The low-cost land bank—since most of the land was acquired before the recent spiral in prices—is another positive factor for the stock. However, new land acquisition may be at a higher cost and this may dilute the cash holding and higher margins.

Given the strong cash flow and increasing earnings visibility, analysts feel the stock deserves a re-rating. While most real estate stocks have rallied in the recent past due to the expected cut in interest rates, Oberoi Realty underperformed because it is a debt-free company and, therefore, is unlikely to be a major beneficiary of the rate fall. Due to this, the gap between the company and other high debt peers has come down once again, thereby offering a good entry point.

Selection methodology: We pick the stock that has shown the maximum increase in consensus analyst rating during the past month. Consensus rating is arrived at by averaging all analyst recommendations after attributing weightages to each of them (5 for strong buy, 4 for buy, 3 for hold, 2 for sell and 1 for strong sell) and any improvement in the rating indicates that the analysts are becoming more bullish on the stock. To ensure that we pick only companies with a decent analyst coverage, this search is restricted to stocks that have been covered by at least 10 analysts.